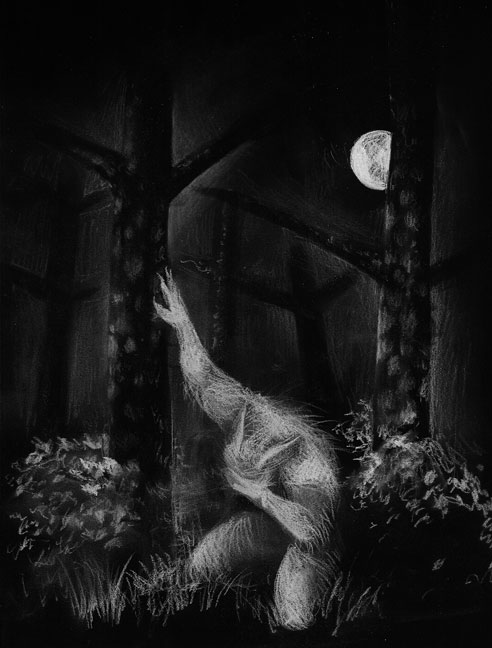 I got a pad of Strathmore Artagain (recycled, get it?) black paper a little while ago because it looked neat, and a few white charcoal pencils. Earlier tonight we were watching a recent episode of Man vs. Wild set in Transylvania, and the mottled bark of a tree caught my eye. So I drew the trunk, and without additional planning, the tree became a forest, which then became a werewolf in said forest. I’m just not much of a landscape person…and unless I can focus on something nearby and incorporate that, I tend to branch off into fantasy or horror themes.

Sometimes I’ll start on a drawing and get impatient. That’s what happened here. Once I realized this kind of charcoal doesn’t apply or blend quite as smoothly as regular charcoal, I focused less on detail and got sketchier. I hadn’t realized I was intentionally blurring my eyes while working on this until I looked up after a while and was having trouble focusing. Artagain may need to be used in an alternate manner for future projects.

My impatience took a toll in another way, too. Generally, starting a drawing of a person or creature starting with their hand is not a good idea. But, since I was just tooling around with this and feeling so-so about the results, I did just that. I got the forearm in a good spot, and then the shoulder, and then had to figure out what was happening with the rest of his body. Hrm. It turned out okay given its origins, but I feel a little regret at the sloppiness. That’s probably why I gave this werewolf a big ol’ headache. Or maybe it’s allergies.