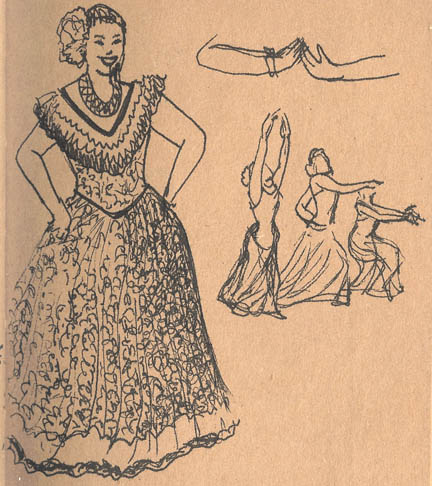 Time off plus a dearth of airline miles recently led us, happily, to Hawaii–the Big Island in particular. We went on a whirlwind tour of it seven & a half years ago for our honeymoon, and have been wanting to go back and spend more time at Volcanoes National Park and pretty much everywhere else on the island. The timing was fortunate, as the week we went was also the Merrie Monarch Festival. The highlight is three days of hula competitions, which attract the best performers from around the islands and the mainland. Tickets are extremely difficult to come by, so each of the nights we picked up takeout and settled in our room to watch it on the local acccess channel, with the chorus of singsong chirping frogs outside for background.

The dancing and costumes were lovely, so I worked in a little sketching while watching. The competition days were as follows: Day 1 was Miss Aloha (singles), Day 2 was ancient hula (group), and Day 3 was modern (group). The ancient hulas all included chants, and existed prior to 1893 or so. I thought the modern hulas would be more…well, modern, but in this case they were mostly from the 20’s and 30’s. In one hula shown on the third sketch, the performers sat down and tied tiny drums on their thighs to tap as they chanted. I ended up not having more than a half-dozen pages of sketches, though,  because I was too busy watching.