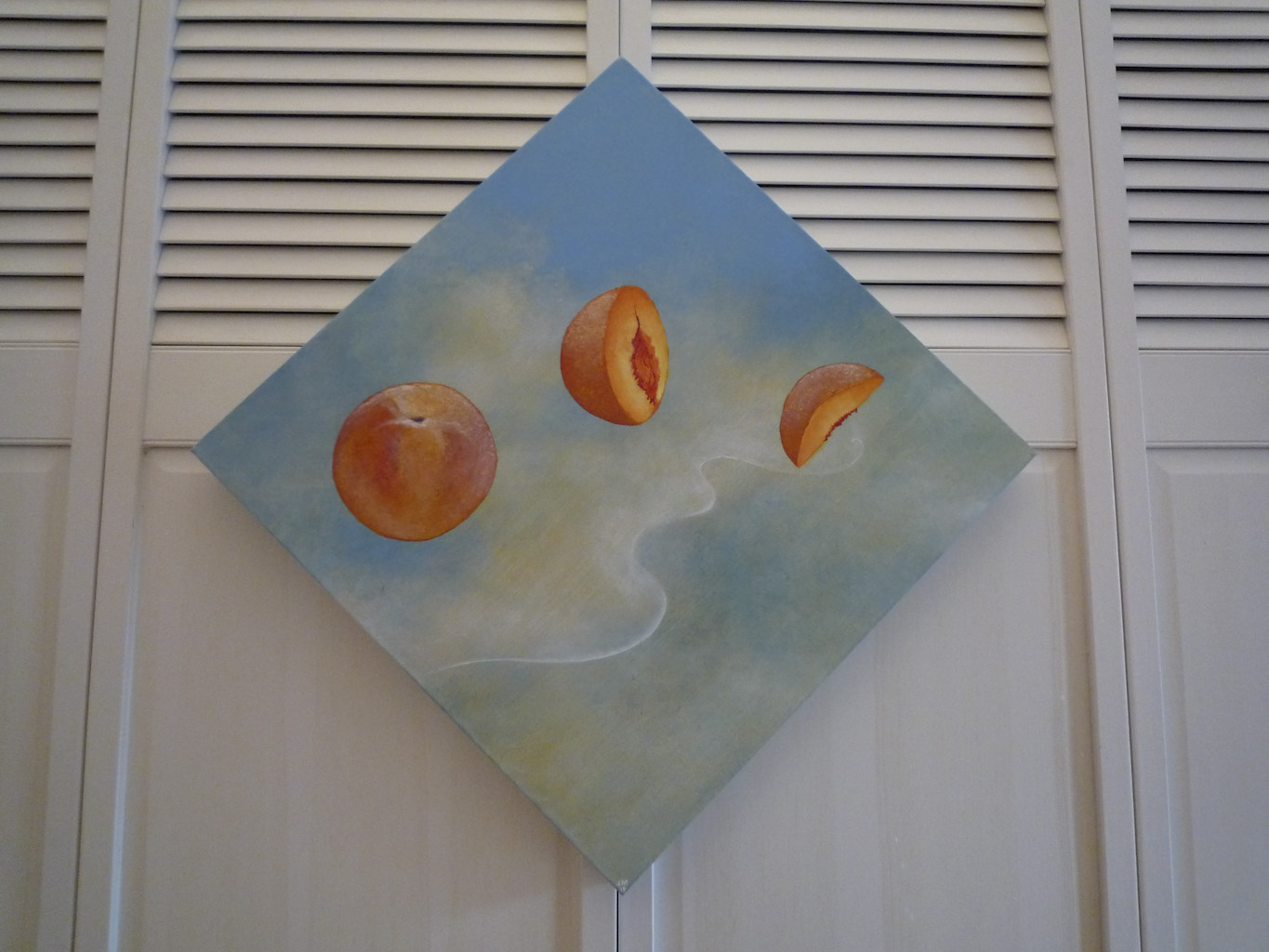 Phases of the Peach

ACRYLIC ON CANVAS •
Not for sale

There’s a crooked peach tree on our front lawn, one that yields a sizable bounty every August. And I have finally finished this peach painting, after beginning it a year or more ago.

Last year I decided I wanted to paint peaches from it, and got to sketching. Whatever little spark I’d had after making the sketches faded once I started painting the sky, though, quashed by doubt–a blue sky, really? is this kitschy? I’d started with a gold base, hoping that some of the shine would come through but realized that as an undercoat it just made the next layer of paint look dull and weather-beaten. I fixed it up enough to get a good blue and some reasonable clouds, but otherwise the empty sky was relegated to the side of my art table, gathering dust.

Seeing the peaches ripen this year motivated me to give it another go one evening, so I painted in the peach shapes using a copper paint, effectively repeating the same metallic-paint-as-undercoat mistake. Doh. It sat untouched for another few weeks. The peaches themselves began demanding attention, dropping off the tree, so we gathered them up and  last Sunday made a batch of peach preserves. While making the preserves, I realized that this was it–if I didn’t work on the painting now, I would probably set it aside again for another year.

So yesterday I loaded up my iPod with Jill Sobule and a bunch of All Songs Considered podcasts and made myself go face the peach painting. In hindsight, I realize that three things made it possible to paint, and finish, now: a deadline, the daytime, and having peaches (both cut and whole) nearby. I guess there’s some subject matter that demands a mood–the Sleepy Hollow painting needed the nighttime, and this one needed the sun.

The cut peaches helped me match the color and paint a base for the cheery yellow insides, but then I got impatient while working on the skin. I held up the whole peach as a reference, and even took a picture of it in the right spot, but I wasn’t happy with the results as I painted because I was so concerned about messing up the edges or the sky. Time to mask. One I masked out the peaches it was a breeze–fast, loose, textured strokes. So much better!

I worked from the peaches themselves as much as possible, though at one point while I was feeling stuck I idly looked through the pics-in-progress on the camera. I was struck by how much more I noticed about the highlights of the peach, and used that little LCD preview as a reference to go back and fix it up. This also came in handy when I was almost done and started wondering whether I should hang it diagonally as I originally intended, or turn it on its side instead. I took pictures of it both ways, and also set it up and stared at it for a while each way before deciding to go back to the diagonal. And now, it’s done and hanging on the wall. Hallelujah!